On Tuesday, March 2, 2021, Rhode Island voters approved the Beach, Clean Water and Green Bond with an astounding 78.3% support. Voters across the state supported the $74 million bond question, with all 39 cities and towns posting returns of at least 60% in support. (View election results.) The message is loud and clear: Rhode Islanders care deeply about the quality of the environment. The funding provided by this bond will leverage tens of millions of additional dollars that will be invested in cleaning our water, improving public health and the resilience of our communities, and creating more inviting beaches, parks and campgrounds for the enjoyment of all Rhode Islanders. This is an historic opportunity for our State Park System!

The value of Rhode Island’s network of beaches and parks, green spaces, and waterways goes beyond beautiful places and recreational opportunities for public enjoyment. This network is important to the state’s economy and ability to attract people and businesses. The health of Narragansett Bay and our local waters is central to our environment, way of life, and economy in Rhode Island. Each year, our state beaches and parks delight millions of visitors and generate jobs and revenue that support state and local economies, while our farms support the continued growth of our vibrant food sector. This proposed bond invests in our state beaches and parks, outdoor recreation, farmland and forested land, water quality, and community resilience.

DEVELOPMENT OF PARK ON FORMER I-195 LAND: $4 MILLION investment for park infrastructure development of a nearly 7-acre park on both sides of the Providence River connected by a pedestrian bridge that opened in 2019. Funds will be used to construct park infrastructure to enhance utilities, support park operations and programming, and enable food and beverage service.

MUNICIPAL RESILIENCE PROGRAM: $7 MILLION to help local communities restore and improve resiliency of vulnerable coastal habitats, river and stream floodplains, and infrastructure. This investment will fund matching grants up to 75% to directly support Rhode Island’s cities and towns to identify top hazards, improve community resiliency, and strengthen public safety in the face of increased flooding and more frequent and more intense storm events driven by climate change. The Municipal Resilience Program has already been successful in identifying strategies and providing action grants to implement projects in five communities. This funding will unlock additional resources for those communities and allow 20 additional municipalities to participate in the program over the next two years.

WOONASQUATUCKET RIVER WATERSHED COUNCIL: $2 MILLION to develop, improve, and rehabilitate public recreational projects and infrastructure along the Woonasquatucket River and its Greenway, from North Smithfield and Glocester through Smithfield, North Providence, Johnston, and Providence. 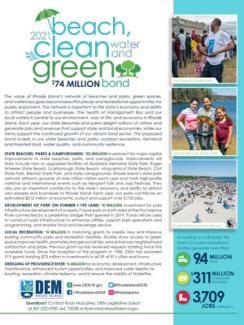 The health and vitality of our lands, waters, and communities support our way of life and economy in Rhode Island. This proposed bond invests in our state beaches and parks, outdoor recreation, farmland and forested land, water quality, and community resilience.