The value of Rhode Island’s network of historic parks, bikeways and open spaces goes beyond providing beautiful places and scenic greenways for public enjoyment. This network is an important contributor to the state’s economy and ability to attract people and businesses to Rhode Island. Each year, our parks delight visitors and also generate jobs and revenue that support state and local economies – while our farms support continued growth of the state’s vibrant food sector.

The Green Economy Bond provides $5 million in matching grants to communities to develop and improve public recreational areas. Through a 2016 grant round, $2 million of these funds have already been awarded to six communities. DEM plans a 2017 grant round for the remaining $3 million this fall.

The Green Economy Bond also includes $4 million in matching grants to assist communities in protecting open space. A 2017 grant round is scheduled for summer. In partnership with municipalities and land trusts, DEM has helped protect 160 properties since 1985, attracting over $42 million in private investment.

Rhode Island is home to thousands of brownfields, and many occupy desirable commercial and industrial space. Through the Brownfields Remediation and Economic Development Fund, created under a 2014 environmental bond, the State has invested $5 million into 23 projects in 10 Rhode Island communities. These grants leveraged $575 million in additional investment and support more than 3,700 jobs. Since 1995, some 800 brownfields sites have been cleaned up with assistance from DEM.

The Green Economy Bond includes $3 million in matching grants to help communities and businesses improve their stormwater systems and reduce pollution to Rhode Island waterways. The current grant round – open May 5 to July 28, 2017 – includes this funding in addition to $3.4 million in other state and federal grant funds for flood and pollution prevention. In all, $6.4 million will be invested to help improve the safety and quality of our communities. 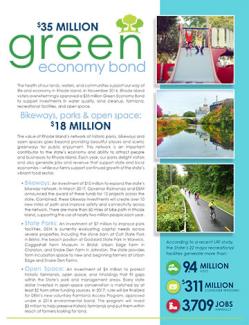