The Rhode Island State Climate Office was assigned to the University of Rhode Island in the early 1970’s with Professor James Haven in the Department of Geography as the first NOAA recognized RI State Climatologist. In 1980 Professor Robert Wakefield became the State Climatologist when Prof. Havens departed URI and with the retirement of Prof. Wakefield, Carl Sawyer his research associate took over the duties on an interim basis. Carl Sawyer has since left the position in early 2000.

Until late 2015, Lenny Giuliano, the Rhode Island state meteorologist has assumed the duties of state climatologist.

The RISCO is located within the Rhode Island Department of Environmental Management (RIDEM).

This web page is a portal to federal and state agencies with weather, climate and water resource information for Rhode Island.

The mission of the office is to provide timely, high quality, and pertinent climatic data and information to the state, public and private citizens and decision makers in Rhode Island.

The Rhode Island State Climate Office strives to acquire, archive, process and disseminate, in the most cost-effective way possible, all climate and weather information that is or could be of value to public officials, corporations and private citizens in the state. Much of this information is made available at a very small charge or no charge.

Overview of Climate in Rhode Island

Topographic features - Rhode Island, the smallest of states, shares the southeastern corner of New England with a portion of Massachusetts. The State extends for 50 miles in a north-south direction and has an average width of about 30 miles. The total area, including Block Island some 10 miles offshore, is 1,214 square miles.

There are three topographical divisions of the State. A narrow coastal plain lies along the south shore and Narragansett Bay with an elevation of less than 100 feet. A second division lies to the north and east of the Bay with gently rolling uplands of up to 200 feet elevation. The western two-thirds of Rhode Island consist of predominantly hilly uplands of mostly 200 to 600 feet elevation but rising to a maximum of 800 feet above sea level in the northwest corner of the State. 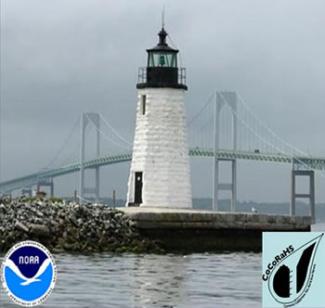