Spotted Lanternfly is an invasive plant hopper insect that was introduced into the United States in 2014. Native to China, this pest is associated with the invasive Tree of Heaven (Ailanthus altissima) but can also cause significant damage to grape, apple, stone fruits, walnut, and other economically important plants. It's also a significant nuisance that affects the quality of life and enjoyment of the outdoors. Rhode Island is at high risk of this invasive pest.

Spotted Lanternfly (SLF) is plant hopper, a type of “true bug” that uses a stylet (or beak) to pierce plant tissue for feeding. In addition to the spotted patterning, the adult SLF’s unique colors feature scarlet underwings, yellow markings on its abdomen, and tan semi-transparent forewings. Adults about an inch in length and can be found late July into November. The nymph stage appears in June and July and feature strikingly bright red and black bodies with white spotting. Early stage nymphs lack the red color and appear completely black.

In 2021, a confirmed finding of a single Spotted Lanternfly (SLF) was found for the first time in Rhode Island in an industrial/commercial area in Warwick near Jefferson Blvd. In August 2022, DEM found an additional credible report of an invasive Spotted Lanternfly sighting in Smithfield. Patches of SLF found along Route 7 in Smithfield indicated Rhode Island's first confirmed population of SLF. This was later confirmed by US Department of Agriculture (USDA). DEM is currently surveying the area to determine the extent of its spread and working with USDA and the University of Rhode Island to minimize its spread. View latest press release

Please do your part to protect our local ecosystems and #BeatTheBug – if you suspect you find an SLF in RI, please do the following:

Prior to August 2021, the closest known location of Spotted Lanternfly to Rhode Island was in Connecticut in Greenwich, CT, where officials announced the detection of a population of the pest. Single insect findings have occurred in other locations of Connecticut, including in West Haven in 2020, Southbury in 2019, and Farmington in 2018. Neighboring Massachusetts has also had two findings of dead SLF adults in Norwood and Milford.

Although they can fly distances on their own, Spotted Lanternfly are excellent hitch hikers and mainly spread through human movement. Their inconspicuous egg masses can be laid on pallets, vehicles, and other goods. It’s important to inspect shipping and adhere to travel restrictions when moving through a quarantined area.

In addition to its spotted patterning, the adult SLF’s unique colors feature scarlet underwings, yellow markings on the abdomen, and tan semi-transparent forewings. Adult lanternflies are about an inch long and are active from August until the first hard freeze, which typically occurs from late October into November.

If you suspect you found a spotted lanternfly

Early detection is key to protect Rhode Island's plants and forests. Help us prevent spotted lanternfly by learning how to identify the egg, nymph, and adult life stages of this pest. If you suspect you found a spotted lanternfly take a photo and try to collect a specimen. Then, contact the URI Biocontrol Lab or report this find to DEM's Pest Alert Form.

Although SLF can fly distances on its own, these pests are excellent hitch hikers and mainly spread through human movement. Their inconspicuous egg masses can be laid on pallets, vehicles and other goods, so it is important to inspect shipping materials and adhere to travel restrictions when moving through areas that are under quarantine for SLF. The following tips can help stop the spread of SLF:

SLF was first detected in Pennsylvania in 2014 and has quickly spread through surrounding states. In Pennsylvania, where the pest has been spreading for over six years, there has been significant yield loss in vineyards and the insect has become a public nuisance.

Here’s how businesses can help. Visit the USDA's website for free outreach materials to alert your team about the spotted lanternfly and how they can help stop it. 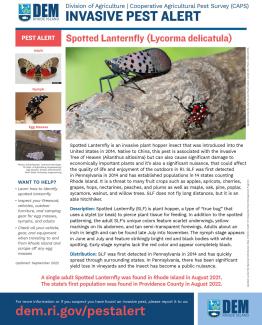 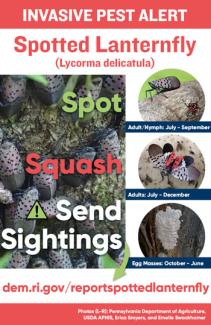 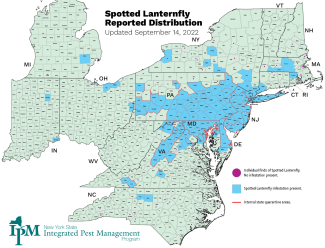